By Bobbie ChristmasSeptember 9, 2009No Comments 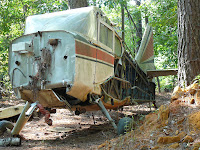 Julia Cameron’s book, The Artist’s Way, portrays many ways of staying in touch with your creativity. One of my favorite of her suggestions involves making a play date with yourself and allowing yourself to go somewhere and simply be.
Sometimes my play date involves going to an art supply store and wondering around, pondering all the possibilities involving the various media and materials. I can take myself on a play date to an office supply store in the same way.
Labor Day, however, I went on an artist’s play date spontaneously, and I had a blast. My friend Vicki and I were in the front yard of my house watching for chipmunks, enjoying the sun, and letting my dog take a pee break, when we heard a prop plane overhead. I told her, “It’s probably from the little airport nearby.”
Vicki’s eyes bulged with excitement. “Airport? There’s an airport nearby?”
I shrugged. “It’s about a mile from here as the crow flies, but we have to drive around to get to it. I know it’s there because over the years I’ve seen small planes taking off and coming in for a landing, but I’ve never bothered to go over there.”
She stood up. “You know I used to fly airplanes. I love airports! Let’s go check it out Maybe it will have a restaurant where we can have lunch.”
I shook my head. “Oh, I don’t think it’s that kind of airport. I mean ultralights used to fly out of there. I suspect it’s just a landing strip or something. I have never been able to see it from the street.”
“Let’s go anyway,” she said. As a last-minute thought, she said, “Let’s bring your camera.” Within minutes we were driving down my driveway in Woodstock, Georgia, without any idea of what we might find.
Soon we saw a road sign with an airplane on it. “That means the airport sign must be nearby,” she said.
I explained the sign was probably to warn motorists about low-flying planes. I had driven down that road many times and had never seen a sign that said “Airport.” I had seen a road called Air Acres, however, that made me think it might be the right road to take. We found that road and turned into a dirt road with “No Trespassing” signs posted on the woods on both sides. We passed truly rural houses, old Georgia residences for those accustomed to growing their own food and living the country life. I did not feel certain we were on the right road, until we spotted a derelict airplane, wings missing, surrounded by trees. “Look! There’s a plane that crashed in the woods,” I told her. We both gasped. I drove on down the dusty bumpy road. We passed a lawn ornament made out of a galvanized wash tub with American flags stuck on top. Hilarious!
The older homes gave way to newer ones. but the road did not get any more inviting. Still, we plowed on, not knowing what lay ahead. Finally I saw what looked like a gate across the road far ahead, but another dirt path took off to the left, so I turned the wheel and drove in the new direction. Soon we crested a hill, and in front of us spread wide, lush, green lawn, neatly mowed. It bore no resemblance to the dirt runway I expected to find. I pulled in and parked near a large hangar where a partially built plane tuck its propeller out into the sunshine. To one side of the building I spotted rusted out trucks and a junk pile loaded with tires, bed springs, and car parts. 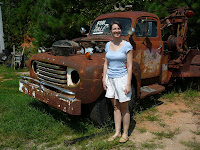 We jumped out of the car and a huge dog lumbered toward us, one definitely weighing more than a hundred pounds. It showed no sign of aggression, though, so I let him sniff me, and I buried my fingers deep in the thickest coat I’d ever felt on a dog. He obviously enjoyed the affection, too. He had German shepherd markings, but obviously had some other blood mixed in, possibly Clydesdale horse, I thought with a chuckle, considering his size and bulk.
While I talked to the dog and petted him, Vicki went into the building and found a man who gave his name as Kirk, and Kirk gave us permission to look around and take photos if we wanted. I walked into the hangar where Vicki stood admiring the bright yellow plane under construction, and my knees nearly buckled when I saw about six antique vehicles, all in various stages of restoration and customization. I love old cars and unique cars (which could be why I drive a 1990 zebra-striped car), and Vicki loves planes, so both of us were delighted. 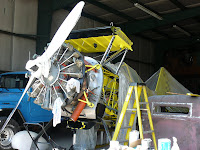 Kirk said the experimental plane under construction was his swan song, the last plane he would build, and he had built several. He said his friend owned the cars and trucks, and they worked on them together, restoring them and souping them up. He gladly answered any questions we asked, and we had plenty of them.
A long-time pilot, Kirk said he had nearly been killed in three separate crashes but added, “I still love to get that adrenaline rush, though.” When I asked about the dog, Kirk said, “Oh, that’s Jake. He’s mostly wolf. He won’t hurt you.”
“I know; I’ve already been petting him,” I admitted. 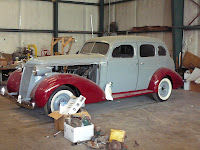 Kirk’s friend showed up with another huge dog, Ivan, although nothing could match Jake’s size.
About that time Vicki said she heard a plane that might be coming in for a landing.
“I don’t hear anything,” I said.
She said, “When you learn to fly, you learn to listen for other planes.”
I still heard nothing. At least a full minute or more passed before I finally heard a plane. It came in low across the field. “It’s not landing,” I said, disappointed.
“It’s in a landing pattern,” Vicki said. She explained landing patterns and what planes do to approach a landing.
I realized how little I knew about flying.
After clearing the trees a bright yellow plane appeared as if my magic. Vicki grabbed my camera. The image on its screen becomes almost invisible in sunlight, so I don’t know how Vicki managed to snap two photos of the plane as it landed. I watched in awe as the prop plane landed as if it to give us our own private show.
Kirk explained that people lived along the edges of the airstrip and parked their planes in the hangars there. What a neat lifestyle, and all taking place within a mile or so of my suburban subdivision!
After spending about an hour in what seemed like a wonderland, Vicki and I left the airstrip elated at our discoveries and adventure. None of it would have happened, though, if either of us had brushed off the news that there was an airstrip nearby. I have lived in my house for fifteen years and have known for much of that time that planes took off and landed nearby, but I had never given myself and my inner child permission to go out and play, go out and discover what lay just over the trees. I had never given myself the artist’s date to explore my own neighborhood for surprises.
I look forward to many more adventures in my zebra car, and I am thankful Vicki was the catalyst that made me let my inner artist come out to play.
I have more photos to show, but the blog limits me to just a few. I may post another blog simply to show the other photos. Enjoy.

Editor Bobbie Christmas is your book doctor. She can also be your mentor, ghostwriter, copywriter, and writing and publishing consultant. After spending decades writing and editing for a living, Bobbie became a much-sought-after seminar and workshop leader. She began Zebra Communications in 1992 in Atlanta, Georgia, to provide professional editing services to publishers and to writers like you.